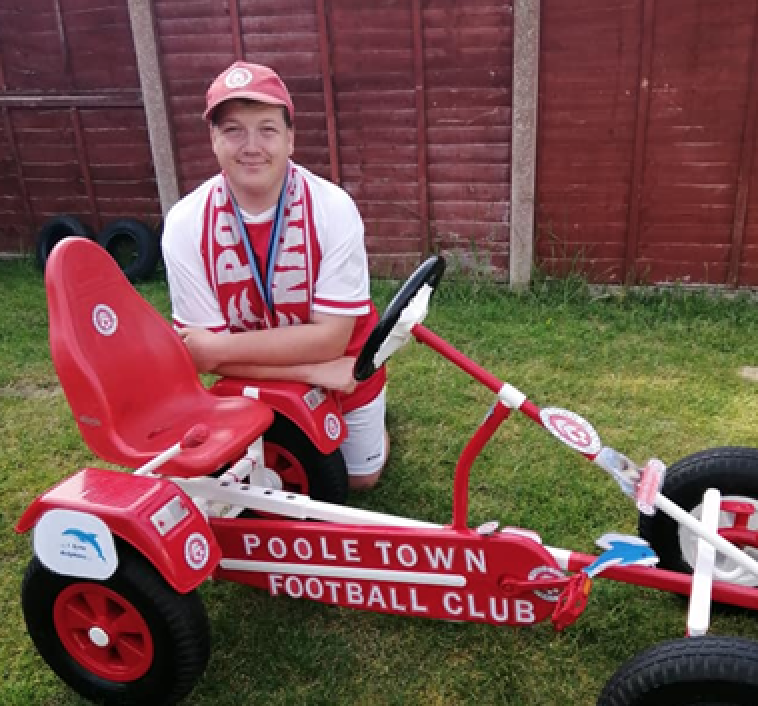 Arguably the club's biggest supporter, Josh Faramus lives and breathes everything related to Poole Town Football Club. A young autistic boy from Northbourne, Josh's dedication to the club has even seen him become the much-loved, unofficial drummer boy for Poole Town FC. And now he wants to help support this 140-year-old club and its excellent community work.

Josh has built and decorated a go-kart in Poole Town's red and white colours, hoping the sight of it might attract new supporters to the club. He has since approached Poole Town, offering his support, and has set himself the challenge of travelling 140km in his go-kart from 20th – 24th July. He will complete an incredible 575 laps of the Bournemouth Velodrome at Slades Park, hoping to raise awareness and money for the club. Josh would be ecstatic if he could reach his fundraising target of £2000.

Poole Town, which, runs 35 youth teams and a Kids Initiative, which provides access to sport and equipment for local underprivileged children. After numerous cancelled matches and the economical impact of coronavirus, the club has gone through its fair share of difficult times hopes to continue to do so for years to come.

Always supported by his mum, Nicki, Josh brings his drum to every Poole Town football match, has made his own branded kit, spends his free time writing chants for the fans, and has decorated his bedroom in the club's colours. His passion for the local club is infectious and he is so excited to be able to give back to a club that has given him so much.

Josh says: "The club must go on. I just cannot live without the club"

Poole Town FC Chairman, Chris Reeves says: "What Josh is doing for the Club, which means so much to him and to so many more, has given us all a massive lift. He is a truly inspirational character and I am proud that Poole Town has his allegiance. I so hope that he gets all the support and backing that his efforts so thoroughly deserve. Basketball England's Assist Fund to help the next generation