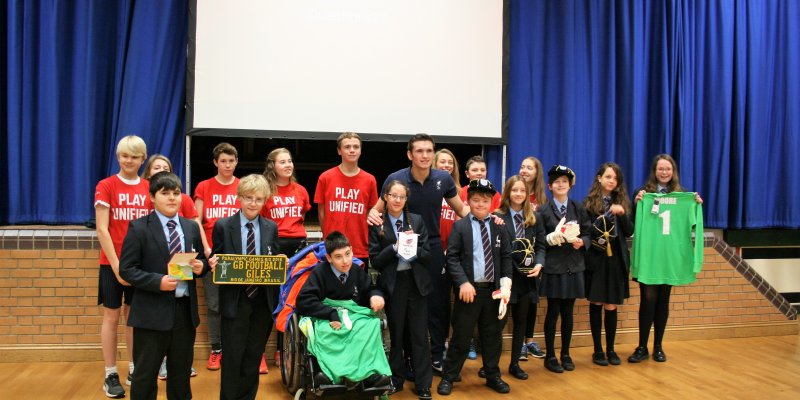 In May 2016 a group of 8 Sports Leaders from Year 9 at Gillingham School started on an amazing journey of discovery that has included meeting Rugby Legends and a Rio Paralympian, and many inspirational physically and intellectually impaired athletes. For all involved this has been a truly life enhancing experience. Play Unified is an Inclusion programme initiated by the Youth Sport Trust to ensure all pupils regardless of their ability or disability take part in the sporting life of the School and is linked with the Special Olympics, the 3rd element of the wider Olympic movement which involves athletes with intellectual disabilities. Around 140 Schools in the country successfully applied to be part of the programme and we were one of a few mainstream schools. The symbol of the Play Unified programme is a red and white football and its bigger brother the giant beachball which we have used a lot!

Following an inspirational Training Day at Sandy Park Exeter during which the team worked with South African Rugby legend Thinus Delport and met England Rugby Internationals Jack Nowell and Lewis Moody, we met once a week to plan our programme and devised our motto #Defy the Odds. At the core of the initial project was the activity of Indoor Curling, chosen because it takes place indoors, is easily accessible by students of all abilities and new to nearly everyone! The Play Unified Ambassadors met the Headteacher who they presented with the special Play Unified mug and set up noticeboards in the library and in School Reception to ensure the project was known throughout the School.

First up was a "Have a Go session" for all year 7 students. The team did a powerpoint presentation in the Year 7 Assembly which finished with the giant Play Unified beachball being passed from one Tutor Group to the next in a novel crowd surfing experiment! Once the skills had been taught the team along with extra Sports Leaders from their year group went back into Tutor Groups to help them sort their teams ready for the competition which ran on an Olympic theme with flags and tutor groups representing countries from all continents. We were trying to encourage students who were not currently involved in School sporting clubs, and this followed a Multisports Festival which ran over 3 days just after half term which aimed to involve every Year 7 student doing something (Netball, Football, Endzone and Sitting Volleyball)

We had a special guest with us on competition day - Giles Moore who competed in the Paralympics as the Goalkeeper for the Cerebral Palsy Football Team. As well presenting the medals to the winners in the morning he met some of our specially invited pupils with physical special needs and learning difficulties and inspired them with his personal story about overcoming his disability to become one of the best Goalkeepers in Europe. He let the students wear his England and Team GB kit which went down a storm! We also managed a Group Mannekin Challenge based on Football of course!

We intend to run a repeat programme with the Year 8 Tutor Groups as part of the general inclusion programme for all our students in Years 7 and 8 and also to run special sessions in a variety of activities for the students who met Giles: we've called this group "The Giles Group" and he is keen to come back and see us again when his studies allow. We invited Giles to be our guest at the annual Sports Awards Evening but sadly England football training intervened!

We wished to take our message out into the wider community and in the town of Gillingham we have the Thorngrove Centre for adults with learning difficulties. Our team delivered Volleyball and Indoor Curling sessions to these folks during their recreation afternoon at the Youth Centre, and it was impossible to see which group was having the most fun! We are now working on a return fixture at Gillingham School to include Basketball and Badminton.

Our involvement in this programme was recognised by the Youth Sport Trust who invited the Chair of Governors Janet Robson, and myself to a special Reception at the House of Lords hosted by Baroness Sue Campbell. We met athletes recently returned from the Special World Championships and Play Unified Sports Ambassadors from Special Schools who described the impact programmes such as ours can have on students. Other invited guests included Alison Oliver, Chief Executive of the Youth Sport Trust, important figures from the world of Disability Sport, and Government ministers.

The next step is for the current Play Unified Ambassadors to appoint and train the next generation to move the project forward – Exciting times!

Spirit of the Games Festival