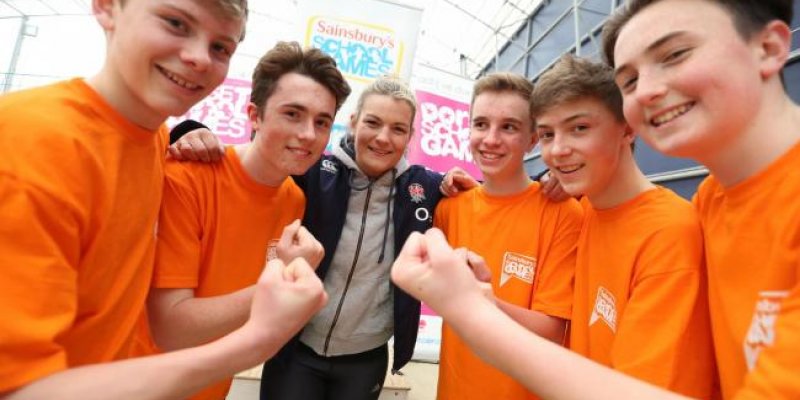 As per usual the atmosphere at the School Games takes a matter of minutes to build up. Winton students in yellow, Purbeck in blue, Canford and Shaftesbury in white, Corfe Hills in orange and Budmouth in purple. With sports like volleyball, handball and rugby to report on a journalist's job is cut out at an event like this! My first interview was with Grange student Jacob who is 14. He is a silver sports leadership ambassador and was most looking forward to the rugby. Since becoming an ambassador he has helped run events all over Dorset. As we spoke he was checking off the schools as they arrived and giving out the t – shirts.

Jamie, one of my regular interviewees, was refereeing the matches in the volleyball room. Jamie is 15 and attends The Grange, he would like to thank Mr Moody for his hard work because he enjoys helping at the events. Jamie was the linesman for one of the courts and had his eagle eye on everyone. He wasn't sure who was going to win as it was, "Too early to say!" He was pleased that the teams were mixed and everyone was being treated as an equal.

I also spoke to Sarah Dunsford who is the School Games Organiser for Bournemouth. Organising the Winter and Summer Games start all year round. For example, the winter games planning starts in the summer holidays the year before. The organisers meet about once a month as a local delivery group with school games meetings in between. There were about 12 volleyball teams, 24 teams for the rugby and 12 in the handball. The organisers work with anyone and everyone who is willing to give up their time, money, leaders and help keep the School Games running. The School Games idea came from the Youth Sports Trust (YST) which is to increase competition within schools and is backed by the Government and was sponsored by Sainsbury's. Sarah's idol growing up in sport would be Steve Redgrave because he stayed at the top of his game for 20 odd years and that's inspirational to her.

Wandering around I found Mudefords tag rugby the team who were taking a break from competing to watch the older students play volleyball. Having the under 12's rugby team was good for everyone because it kept the older student's energy levels up and the younger student's inspired! Interviewing the Mudeford team was great fun because they were all so excited to be there. Having watched some of the tag rugby games the Mudeford team were definitely one to watch out for and they were all at the top of their game. The whole team refused to name their best girl player but named their best boy player Owen. A boy named Thomas managed to do an impressive tag on a boy from Dorchester and his team were very proud of him. On behalf of the Grange they made me promise to send our newsletter over to them so they could read about themselves.

The Sporting Champion at the day was called Abi Chamberlain aged 31. When asked her age she said "I know right I seem so immature!" The School Games are important to her because the competition and the pressure is good. You learn to deal with winning and losing in an environment that teaches you how to react. "People are two minded about the benefits of completion because through life you're going to turn up to an interview and there will be two people. You will always compete against other people so to deal with that pressure and deal with it well and enjoy it is a skill. And it's a skill these guys get to have." She's a big advocate of competition and she enjoys days like this as much as she enjoys playing in an England shirt. She joked I should come to Rio with her! She was surprised that I was being a journalist for the day she told me, "Don't be in a rush to grow up!", act how you need to in that situation. She agreed it was important to turn frustration into something more positive and take it into the next game. Abi would like to thank her coach who made her capable of believing she could become the England captain and she managed it. Her message to everyone who reads this is, "Believe in yourself!"

CAN DO Water Sports